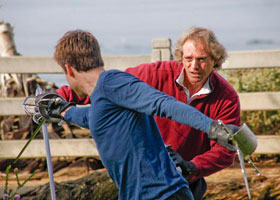 Dueling Arts International (DAI) was founded in 1995 by Gregory Hoffman. He focused on providing comprehensive and intensive stage combat training, and by incorporating his own methodology he created a tradition of training, a tradition that has evolved into the international phenomenon it is today.

In 1995, Dueling Arts International was Gregory Hoffman. He trained students using methods heavily influenced by his lifelong dedication to the practice of Tai Chi Chu’an, and an academic background in the study of movement analysis and fine art. From the very beginning of his teaching career, Gregory’s approach engendered dedication and enthusiasm. Even then, students were eager to take their training with Gregory as far they could, and informal apprenticeships started taking shape. Many of his students became instructors in their own right, and the Dueling Arts family grew.

The need for an alternate teaching and training model arose as the existing paradigm for acknowledging students emphasized physical results. Theatrical and creative elements remained secondary. The requirements for certification demanded work beyond the ability of some actors and therefore elicited mediocre performances and promoted poor execution of necessary techniques. Training was geared primarily toward achieving certification, and thus meeting the physical requirements became a separate, independent pursuit. The original purpose of the art form, to physically articulate a dramatic moment in order to support the performance needs of theatre and film, was left behind. Actors needed more than physical technique to integrate and convey physical actions into a story.

Based on these principles, Gregory applied his own training models and approach to training and certification. In the Summer of 2000, shooting began on the training film that would illustrate this approach. A curriculum began to evolve that supported the logical progression of an actor acquiring these skills.

In 2002 DAI had officially recognized five instructors and carried out certification tests under its own authority. There was a growing demand for instructor training and a motivated group of apprentices. The evolution of instructor training began, and the teaching pool continued to grow, and in turn shape, DAI. Independent testing of performance skills by DAI was first conducted at the 2002 Summer Workshop at the University of Hawaii, Manoa. The testing premises emphasized well executed technique combined with realistic choreographic elements supported by dramatic texts, all designed to encourage success. The DAI curriculum model and DAI skills recognition system both began to gain ground.

In 2005, Gregory released “And They Fight…”, a comprehensive instructional DVD series on theatrical sword fighting. With the need for apprenticeships and instructor training continuing to grow, a group of 18 participants attended the first DAI Teacher’s Symposium in 2006, held in South Lake Tahoe. More symposiums were planned and carried out following the first year’s success. In early 2009 Gregory felt it was time to step back from administration duties and appointed the first Governing Body to take over guiding the organization. Currently recognized teachers overwhelmingly gave their support to a new incarnation of DAI. Dueling Arts International has gone from a corporation of one individual, to an international non-profit organization of thousands of students and over fifty instructors and fight directors worldwide.

Dueling Arts International was founded on principles of balance and integration, respect, and ongoing artistic development – the idea that stage combat like any other art form is based on process, not product. As a result, DAI has grown into an international family. Today, the focus of DAI continues to be a synthesis of discipline, technique, and story, providing in- depth training for actors, instructors, and fight directors alike. For students, technical proficiency is balanced by choreography and technique appropriate for their developing needs and always incorporates working with text and truthful behavior for the character. For instructors and fight directors, the stress on fundamentals and on identifying an individual’s “personal characteristics” finds what makes teachers and directors unique, while encouraging a uniform and practical approach to art form that does not stifle individuality. By acquiring the skills and confidence to advance themselves in their craft, the students, the instructors, the fight directors- and the story and theatrical art form – are best served.