Paul, has been an Instructor with Dueling Arts International since 2002. He received his Theatrical Combatant /combastatus in 1999 under the tutelage of Gregory Hoffman. As a ranked instructor, (Guro) of Filipino Martial Arts with the Lontayao Kali school, ( formerly of the Villabrille/Largusa system of Kali ) he has been a major contributor to the knife and Asian fighting curriculum of Dueling Arts International. He has directed theatrical fights for several repertory theaters in Northern California, including Ferndale Repertory Theater, North Coast Repertory Theater, Redwood Curtain Theater Company, and Sonoma State University. He has worked as an actor/combatant for Marin Shakespeare Company, for their 2000 season. He currently resides in the San Fernando Valley of Los Angeles, and provides instruction in both FMA/Kali-Escrima-Arnis, and the fundamentals of stage combat, while also pursuing work as an actor. 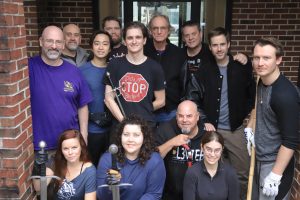 "Learning is the only thing the mind never exhausts, never fears, and never regrets."
DaVinci