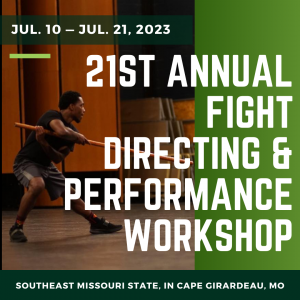 Taking place on the campus of Southeast Missouri State University along the edge of the Mississippi River, this workshop provides a training opportunity for BOTH aspiring Fight Directors in the staging and directing of theatrical fights, and an opportunity for Actors to further develop their performance and fighting skills for the stage, film, and television. Daily subject matter will draw from both classical and contemporary material, and examine both dramatic and comedic contexts. Training will be all day beginning on Monday, July 10 and finish on Friday, July 21, including some evenings. Participants will have Sunday July 16 off to rest! Housing in shared suites with full kitchens is available from Sunday July 9th to Saturday July 22nd. Students will also have an opportunity to arrive early and participate a Gun Safety Course on July 8 and 9.

TRAINING FOR DIRECTORS will consist of lectures, demonstrations, daily rehearsal time, and video taping for analysis. Topics to be covered include the following:

Directing students are required to have prior training in theatrical combat and must submit complete resume with application.

TRAINING FOR THEATRICAL-COMBATANT / PERFORMERS will include:

Gregory Hoffman will be the primary instructor. He is the Founder and Master Instructor of Dueling Arts International, as well as the Founder of True Edge Entertainment. He has been teaching and directing in Dramatic Conservatories, and Theaters in Europe, Asia, and the United States since 1984. Working as an independent filmmaker, theatrical fight director and teacher, movement coach, stunt coordinator, theatrical producer and director, as well as an instructor of T’ai Chi Ch’uan and Laban Movement Studies he is the winner of numerous awards with over 300 professional fight directing credits. A resident fight director and instructor at The American Conservatory Theatre in San Francisco for 12 years, Gregory was also a co-founder of the Nordic Stage Fight Society. In 2005 he released “And They Fight”, a 23-hour comprehensive Instructional DVD Series on Theatrical Sword Fighting which he wrote, produced and directed.

Other Instructors to be announced.

April 1, 2023 – Applications due for both Fight Directors and Actor/Combatants
April 15, 2023 – Notice of acceptance into Workshop.
May 1,, 2023 – A non-refundable deposit of $300.00 is due for Fight Directors, &
A non-refundable deposit of $150.00 is due for Actor Combatants
June 1, 2023 – Balance of remaining fees are due including housing unless other previous arrangements are made.
Please note payments will be preferred by Check though Pay Pal will also be available.
Please also note there will be no refunds of any monies due to your cancellation, except for family or medical emergency after June 1st, 2023.

Fight Directors are required to have prior training and must submit complete Theatrical Combat resume with application. Performers/Actors please note that while preference will be given to applicants with previous training, beginners will also be considered on a space available basis and are very encouraged to apply. All applicants should include resume listing all acting, stage combat experience, and education with your registration form. Fight Directors are also encouraged to bring an Actor / Performer along with them to the workshop. Please note space is limited, and priority will be given to qualified applicants who register first. SO DO APPLY EARLY!

For more info and questions or to apply please e-mail gregory@duelingarts.com

"Knowledge is a treasure, but practice is the key to it."
Lao Tzu